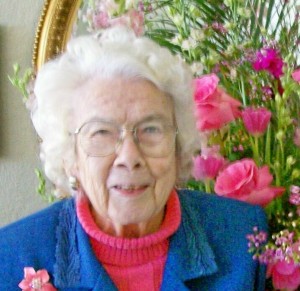 It was an eventful year, 1912. The Titanic sank, New Mexico and Arizona joined the Union, Juliette G. Low founded the Girl Scouts of America, Woodrow Wilson was elected President of the United States. And in Wartrace, Tennessee, Kate and Frank Taylor welcomed their firstborn — a daughter they named Celia Baldwin Taylor. She grew up to marry Jamie Locke of Leiper’s Fork, Tennessee, to whom she gave a daughter, Sara Faye, now my wife of 42 years. As mother, grandmother and mother-in-law, Celia was surely among the best anywhere. We called her “little Granny.” She lived 97 years, three months and fourteen days, and fell asleep in Jesus on May 14, 2009. The world is poorer for her passing.

For nearly a century, Celia worked hard, put others ahead of self and modeled a Christlike spirit. As a child, she helped care for three younger siblings. In her later years she looked after her aged mother, another elderly widow in her town, and her own husband who had suffered a debilitating stroke. As Sara Faye noted in her funeral tribute, Celia was well-known for “her coconut cakes, chess pies and yeast rolls, but she also canned and cooked, stitched and sewed, did tole painting and decoupage, hooked rugs and wove twine for stools.”

She was a devoted Bible student, as her well-marked Bible bears witness. She loved hymns and often sat at her piano playing song after song, blessing herself and all who heard. One of her favorite songs was “O To Be Like Thee,” and she embodied what she sang. We were privileged to have her live with us in Houston for six years before she broke a hip and moved to Comfy Home, a residential care facility ten minutes from our house. She continued to accompany us to church every Sunday until January 2009.

Although she remained free from illness, the years eventually took their toll. During most of the final 72 hours, Sara Faye sat at her mother’s bedside and tenderly held her hand. Last Thursday, hymns played softly in the background. About 1:45 p.m., the music of “Softly and Tenderly Jesus is Calling” filled the room. The song reached the part of the chorus which says: “Come home, come home; ye who are weary, come home!” And, as if on cue, at that very moment our “little Granny” softly exhaled one last time and went on home.

(After an inspirational funeral service in Franklin, Tennessee, attended by relatives and friends from throughout her life, Celia’s mortal body was laid to rest in Mt. Hope Cemetery beside that of her husband Jamie Locke. A memorial service was conducted a few days later at Bering Drive Church of Christ in Houston, Texas.)

SEARCH more than 1,200 gracEmails by verse or word below:
Enter a term in the search box and press enter. You can also further restrict the search to a sub-category by using the drop-down menu.

Or send a completely BLANK email to:
join-edwardfudge@injesus.netatlantic.com