You are here: Home / GracEmail / THIS DOCTOR’S SWORD IS CHARITY

The calm serenity we experienced in Guatemala last week, described in the previous gracEmail, is a rather rare and recent blessing. Surrounded by picturesque lakes, volcanoes, Mayan ruins and exotic flowers and birds, we would never suspect that for many Guatemalan families violence and terror remain an all-too-recent memory. Only 12 years ago the country was still embroiled in a bloody civil war that raged for 36 years and resulted in more than 200,000 dead or missing. An official investigation attributed 93% of the atrocities to government security forces. Even in peace times, most of the 13 million citizens of the Republic of Guatemala lead difficult lives. The average wage is $2,400 per year. Illiteracy is widespread. Malnutrition and infant mortality are soaring. Drug-trafficking, street gangs and organized crime intensify the danger that is part of daily life.

Into this perilous situation, compelled by his Christian faith, a Guatemalan native who for the past third of a century has known the life of a world-renowned surgeon at the DeBakey Heart Center and at Baylor College of Medicine in Houston, Texas, is leaving all that behind in hopes of serving his homeland as its next Vice President. He is Dr. Rafael Espada, 63, now running mate of presidential candidate Alvaro Colom in the September 2007 election. In a country recently known for death squads and constantly accompanied by armed bodyguards, Dr. Espada (the name means “sword” in Spanish) is committed to improve the lives of his fellow Guatemalans through improved healthcare, education and economic growth. Immersed in a culture of violence, Espada is confident that a spirit of Christian charity can ultimately prevail.

As a child in Guatemala, Rafael Espada dreamed of becoming a doctor. The dream intensified when young Espada was assigned a school project and boldly wrote to the legendary Dr. Michael DeBakey of Houston for information. DeBakey sent not only the requested data but also an autographed picture. Espada eventually graduated from medical school in his homeland then won a position to train as a thoracic surgeon under DeBakey himself. For the next 30+ years, Dr. Espada established an international professional reputation of his own. Meanwhile he also served the poor people of Guatemala, flying there monthly to perform cardiovascular surgery without charge to the most underprivileged. In the 1990’s, Espada formed the AMEGESO foundation and through it in 1994 he opened Unidad Cardiovascular (UNICAR), Guatemala’s first heart hospital. Dr. Espada also serves on the board of Faith In Practice, an ecumenical Christian group which organizes medical missions around the world. 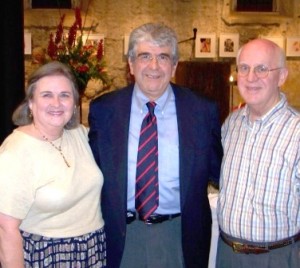 Dr. Espada is a long-time personal friend and family doctor of attorney Mark Lanier of Houston, with whom I practice law. Because of that relationship those of us attending the law firm retreat in Guatemala last week, including Sara Faye and myself, were privileged to share meals and to visit with this honorable soldier of charity on two separate occasions, to hear his story of the past and his dreams for the future (we even got a photograph of him and us as a memento). We thank God for making these encounters possible and we pray for God’s protection on Dr. Espada in the days and years ahead.

SEARCH more than 1,200 gracEmails by verse or word below:
Enter a term in the search box and press enter. You can also further restrict the search to a sub-category by using the drop-down menu.

Or send a completely BLANK email to:
join-edwardfudge@injesus.netatlantic.com