The well, from which Jesus once asked a Samaritan woman for a drink, is fed by underground springs, and its water is fresh and cool. Because the water is moving and not from a cistern, the ancients called it “living water” — a term to which Jesus gave a new and special meaning. 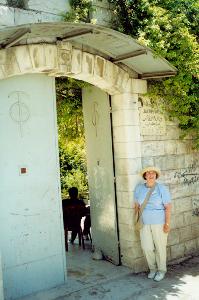 We enter the arched opening through the cut-stone wall into a courtyard, where tree-blossoms, shrubs and a variety of flowers greet our vision. A welcomed breeze softens the dry heat of Israel’s West Bank in June. In the center of the courtyard a concrete walkway leads to a covered stairway at the opposite end. 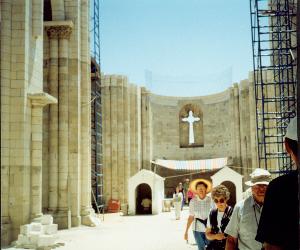 We descend the circular stone stairs 15 or 20 feet below ground level to a vaulted room, floored with stone mosaics and decorated in Greek Orthodox style. Looking around the small chamber to the side opposite the stairs, we see it. This is Jacob’s Well — Bir Ya’qub — where Jesus encountered a Samaritan woman and discussed the spiritual “water” which quenches forever the soul’s deepest thirst (John 4:1-42). 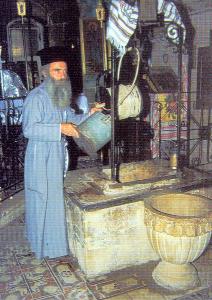 The Orthodox caretaker watches as Saliba, our Syriac Christian guide, turns the hand-crank and lowers the bucket into the soft limestone well. The well bottom has varied in depth through the centuries, from 240 feet in A.D. 670 to 67 feet in A.D. 1881. It was “very deep” in Jesus’ day (John 4:11). Our guide feeds out what he says are 125 feet of rope before the bucket touches water, then begins the arduous task of raising the bucket back to the surface. Several of us gather around and drink from a common brass cup. This well, from which Jesus once asked a drink, is fed by underground springs, and its water is fresh and cool. Because the water is moving and not from a cistern, the ancients called it “living water” — a term to which Jesus gave a new and special meaning. 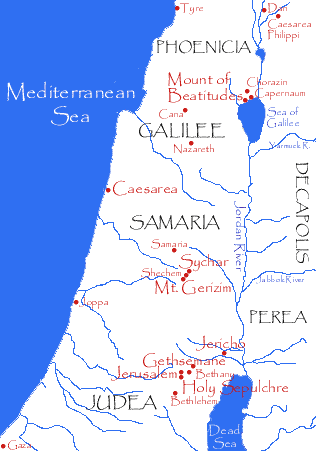 Although called “Jacob’s Well” from Jesus’ time forward (John 4:6, 12), the Old Testament does not mention its origin. The Genesis saga does say that Jacob purchased land at the village of Shechem, modern Nablus, very near this Samarian site of Sychar, now known as Askar (Gen. 23:18-20; see Joshua 24:32; John 4:5). But the authenticity of this well is undisputed. Samaritans, Muslims, Christians and Jews all agree that this is the place where the story took place which is recorded in John chapter four. We reflect for several minutes on what happened here, almost 2,000 years ago, then climb the steps back to the courtyard and exit to our bus. As we leave, we view Mount Gerazim not far away, atop of which are the ruins of the Samaritan Temple. But that is a story for another day.